Bad News for Labour Antisemitism, the Party and Public Belief 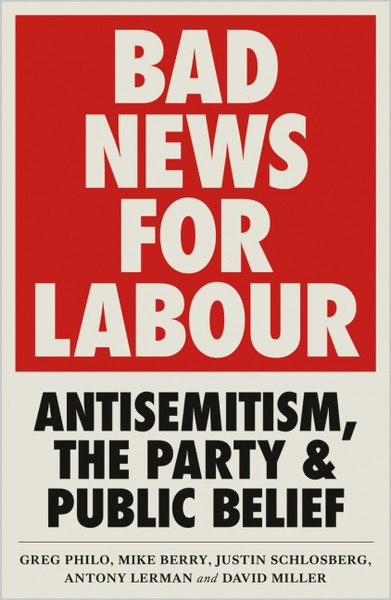 Bad News for Labour Antisemitism, the Party and Public Belief

There has been an extraordinary media output on the issue of Jeremy Corbyn, the Labour Party and antisemitism. Accusations about the Labour Party have made headlines on a daily basis. In the three years after Corbyn became leader there were over five thousand news stories and articles in the national press alone.

Bad News for Labour examines the impact of this coverage on public beliefs about the Party. It replaces media hype with the rigorous analysis of evidence. The authors draw on carefully compiled research to reveal surprising findings in this guide to the reality behind the headlines.

'At last! Here is a book that rigorously examines the facts behind the allegations of antisemitism in the Labour Party. The reality is more shocking, and more surprising, than the headlines in the press would have you believe. Here is the evidence - read it. Then learn the lessons suggested here.' - Ken Loach

'The essays in this book provide evidence and arguments that are deeply troubling for all concerned, and demand careful attention.' - Peter Golding, Emeritus Professor, Northumbria University

'What the careful research reported in this book reveals is a successful disinformation campaign. Anyone who cares for facts needs to read it.' - Colin Leys, honorary professor at Goldsmiths University of London; author of 'Market-Driven Politics: Neoliberal Democracy and the Public Interest', and, with Stewart Player, 'The Plot Against the NHS'

'This compelling, thoughtful text is essential reading for everyone on the left wanting to confront antisemitism. It provides a benchmark for future research and strategy when tackling this explosive issue of our time.' - Lynne Segal, author of 'Radical Happiness: Moments of Collective Joy'

'Reading this timely book convinces me that the media campaign against antisemitism in the Labour Party is similar to the media onslaught on the 'loony left' in the 1980s. Both campaigns connected to some disturbing truths: and both inflated and weaponised these truths for political purposes.' - James Curran, Professor of Communications at Goldsmiths University of London, co-author of 'Culture Wars: The Media and the British Left'

'A necessary corrective to widespread media distortions. Scholarly and persuasive, it rescues the facts from a storm of misinformation.' - Raoul Martinez, author of 'Creating Freedom'

'Full of fascinating research and compelling evidence. This is a serious and timely piece of work.' - Francesca Martinez, comedian and author of 'What the **** Is Normal?!'

'Shines a bright light on the real reasons behind this manufactured crisis and the truth at the heart of it. Recommended.' - Alexei Sayle, comedian, actor and author

'This carefully-executed study uncovers and explores a propaganda exercise of astonishing scale and effectiveness: the relentless effort to tar Corbyn's Labour Party with anti-Semitism. The impact is revealed by the fact that public estimates of the number of Labour members investigated on the charge is literally hundreds of times the actual number. And other perceptions have been comparably manipulated. A very revealing inquiry, yielding much to ponder.' - Noam Chomsky