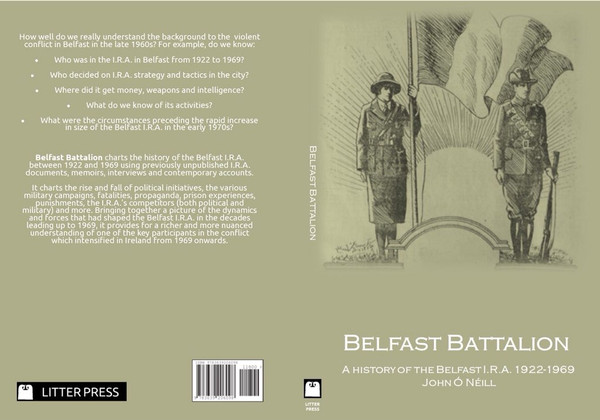 What do we really know about the background to the conflict that began in Ireland in the late 1960s? Up to now little has been written about the I.R.A. in one of the key centres of violence, Belfast, in the decades before 1969. For the first time, this book brings together several years of research to create a detailed history of the Belfast I.R.A. from the 1920s up to the start of the more recent conflict. It addresses key questions such as:
Who was in the I.R.A. in Belfast from 1922 to 1969?
Who decided on I.R.A. strategy and tactics in the city?
Where did it get money, weapons and intelligence?
What do we know of its activities?
What were the circumstances preceding the rapid increase in size of the Belfast I.R.A. in the early 1970s?

Using previously unpublished I.R.A. documents, memoirs, interviews and contemporary accounts, Belfast Battalion explores the rise and fall of political initiatives, the various military campaigns, fatalities, propaganda, prison experiences, punishments, the I.R.A.’s competitors (both political and military) and more. In bringing together a picture of the dynamics and forces that had shaped the Belfast I.R.A. in the decades leading up to 1969, it provides for a richer and more nuanced understanding of one of the key participants in the conflict that then intensified in the early 1970s.

Dr John O'Neill is originally from Belfast. A former researcher and lecturer in Archaeology in Queens University Belfast and University College Dublin, he has published a number of books on Irish archaeology, mainly prehistory, which was extraordinarily useful preparation for researching a clandestine organisation like the I.R.A.. He keeps a blog on Irish history, mainly on Belfast republicanism, at www.treasonfelony.com.