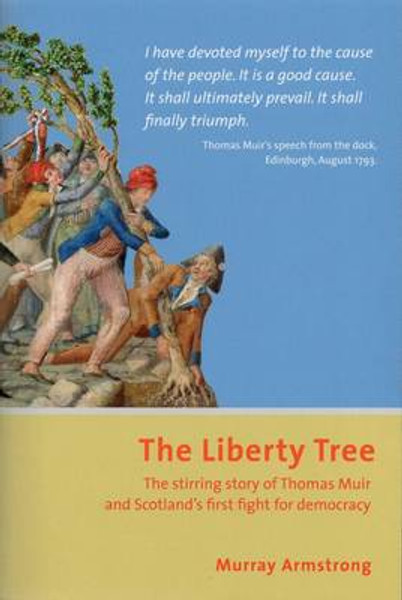 The Liberty Tree: Thomas Muir and the Birth of Scottish Democracy by Murray Armstrong (Paperback) (ISBN: 9780992739225)

"Murray’s superb research is skilfully woven with narrative that seamlessly brings to life the incredible story of one of Scotland’s greatest unsung heroes." Jimmy Watson, Chair, Friends of Thomas Muir

"The theme Armstrong pursues, and which dominated Muir's political career, namely whether democracy is best served by reform of the Union or by breaking with it, is central to contemporary Scottish public life and is likely to remain so, whatever the outcome of the Referendum." Neil Davidson, University of Glasgow, author of 'The Origins of Scottish Nationhood'; 'Discovering the Scottish Revolution 1692-1746', winner of the Deutscher Memorial Prize

"A truly enjoyable read, Murray has captured the true story of the oppression in 18th century Britain. He has admirably portrayed the part that Thomas Muir played in his attempts to bring democracy to all men in Britain. This is a book based on historical facts which is still relevant in today’s world as much now as then." Alex Watson, Huntershill, Friends of Thomas Muir

'The Liberty Tree' is a historical novel about the life and struggles of the Scottish Radical Thomas Muir (25 August 1765 – 26 January 1799). At the same time the author recreates events using the actual recorded words of the participants (eg. the famous exchanges between Braxfield and Gerrald during the latter's trial) and as such 'The Liberty Tree' also stands as a vivid, well-researched historical account of the life of Thomas Muir.

Murray Armstrong was born in Airdrie, Lanarkshire. He was a journalist who spent the final twenty-one years of his career at the Guardian which he joined in 1987 as a features sub-editor. He was Associate Editor at the time of his early retirement in 2008 which he took with the express intention of writing about Thomas Muir having nurtured an interest in the man and his times for many years.