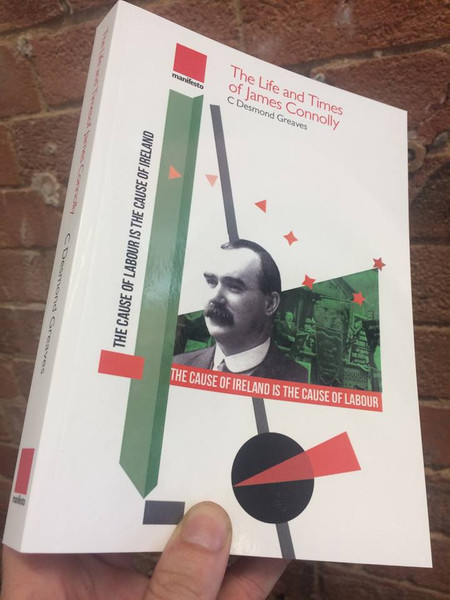 A new edition of The life and Times of James Connolly co-published by the Connolly Association and Manifesto Press.

James Connolly, Irish Socialist Republican and greatest of all Irish labour leaders, was shot - strapped to a chair because his wounds forbade him to stand - by a British firing squad on May 12, 1916. Connolly's work and ideas left their mark not only in Ireland but on American and British labour movements. As a young man he was one of the pioneers of the modern labour movement in Edinburgh, the city of his birth. The scene then shifted to Dublin, where Connolly founded the Irish Socialist Republican Party, whose programme declared: " The national and economic freedom of the Irish people must be sought in...the establishment of an Irish Socialist Republic". Then came a period of seven years in the USA where he worked with Daniel De Leon's Socialist Labor Party. In 1910 Connolly returned to Ireland and played a leading part in the working-class struggles in Belfast, and in the Great Dublin lock-out-the highest point reached by the class struggle in Europe in the period leading up to the 1914 war. On the outbreak of war with Germany, Connolly declared: "We have no foreign enemy except the Government of England...We serve neither King nor Kaiser, but Ireland." Thus he set out on the path which led to the Easter Rising of 1916. C. Desmond Greaves's The Life and Times of James Connolly, first published in 1961, is a major contribution to the history of Irelands fight for freedom and is widely recognised as the definitive biography of the greatest of all Irish Labour leaders.