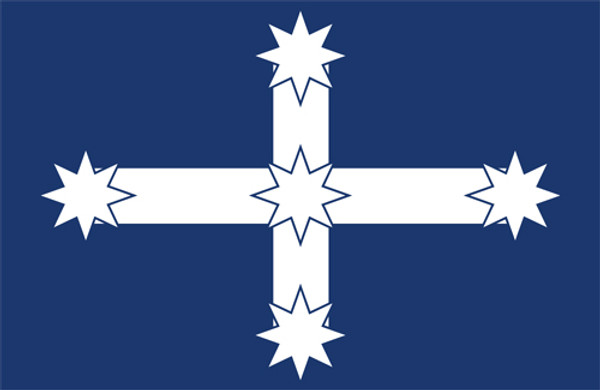 This is a reproduction of the EUREKA Rebellion flag from 1854 in Australia which was fought between miners and colonial British forces.

The original flag was hoisted for the first time on Bakery Hill as a symbol of the resistance of the gold miners during the Eureka Stockade rebellion in 1854. Beneath this flag, Peter Lalor, leader of the Ballarat Reform League, swore: ‘We swear by the Southern Cross to stand truly by each other and fight to defend our rights and liberties’.

The flag was designed by Canadian miner “Captain” Henry Ross, a member of the Ballarat Reform League. With the central feature being the Southern Cross. Ross was inspired by the design of the Australian Federation Flagand incorporated the eight star cross which was a symbol of the Reform League. The flag was made by Anastasia Withers, Anne Duke and Anastasia Hayes, for a large rally at Bakery Hill on 29thNovember 1854. The flag was flown at the centre of the stockade fortification at the battle of the Eureka Stockade on 3rdDecember 1854. During the battle Henry Ross was mortally wounded near the flagpole.