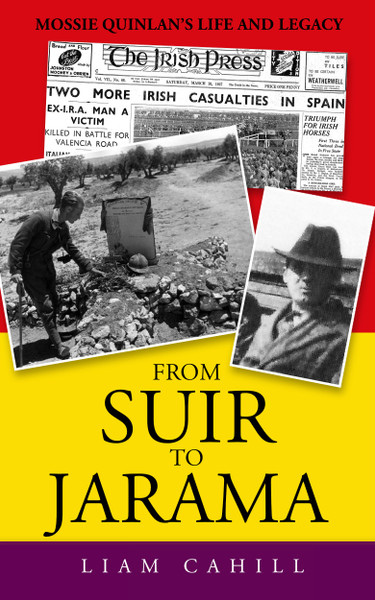 This is history as you have never experienced it before.

Hear the high velocity bullets as they whiz past you, the frightening rattle of machine guns, the heavy rumble of approaching tanks and the whine of enemy aircraft overhead. Hear the surprised and anguished cries of your comrades as they fall around you, dead or badly wounded.

Aided by Hitler and Mussolini with troops, tanks and planes, General Francisco Franco leads a rebellion to destroy the progressive reforms of a democratic government and to instal a Fascist dictatorship. The government is defeated and the unequal struggle is a dress rehearsal for the horrors that soon follow in World War Two.

From all over the world, idealistic young men and women flock to the banners of the International Brigades to help the Spanish workers and peasants defend their freedom and democracy.

‘From Suir to Jarama’ follows the story of a young Irish volunteer, Mossie Quinlan, during his eighty-three days in Spain. Travel into the country undercover with him, train, eat, sleep and fight with him, until his heroic death in the great Battle of Jarama, just outside Madrid.

Learn about Mossie’s life and the ideals that brought him from Ireland to the gore of a Spanish battlefield. And ask yourself: When heroes die, do they take a big piece of their family’s life with them?

‘From Suir to Jarama’ is beautifully illustrated, with comprehensive source materials listed and a full index

The Socialist Imperative : From Gotha to Now