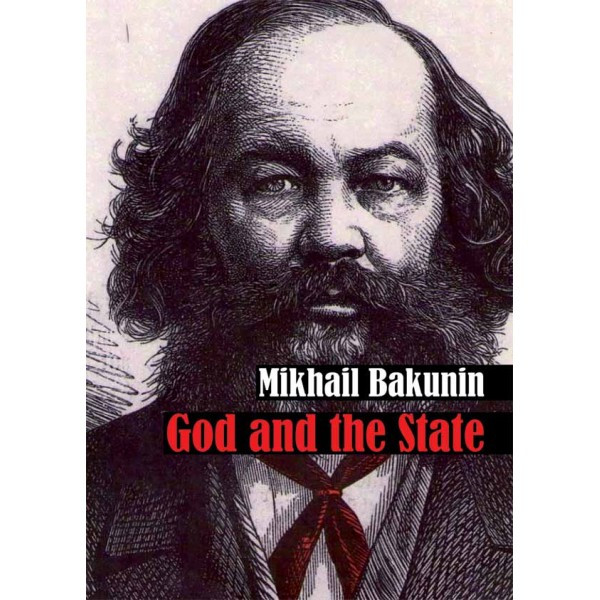 This pocket book starts with the essay “A great thinker or a man of action - how did Bakunin shape anarchism in the 19th century?” by Vyvian Raoul and is followed by Bakunin’s best known work the unfinished “God and the State”.

One of us is soon to tell in all its details the story of the life of Michael Bakunin, but its general features are already sufficiently familiar. Friends and enemies know that this man was great in thought, will, persistent energy; they know also with what lofty contempt he looked down upon wealth, rank, glory, all the wretched ambitions which most human beings are base enough to entertain. A Russian gentleman related by marriage to the highest nobility of the empire, he was one of the first to enter that intrepid society of rebels who were able to release themselves from traditions, prejudices, race and class interests, and set their own comfort at naught. With them he fought the stern battle of life, aggravated by imprisonment, exile, all the dangers and all the sorrows that men of self-sacrifice have to undergo during their tormented existence.

In Russia among the students, in Germany among the insurgents of Dresden, in Siberia among his brothers in exile, in America, in England, in France, in Switzerland, in Italy, among all earnest men, his direct influence has been considerable. The originality of his ideas, the imagery and vehemence of his eloquence, his untiring zeal in propogandism, helped too by the natural majesty of his person and by a powerful vitality, gave Bakunin access to all the revolutionary groups, and his efforts left deep traces everywhere, even upon those who, after having welcomed him, thrust him out because of a difference of object or method. His correspondence was most extensive; he passed entire nights in preparing long letters to his friends in the revolutionary world, and some of these letters, written to strengthen the timid, arouse the sluggish, and outline plans of propagandism or revolt, took on the proportions of veritable volumes. These letters more than anything else explain the prodigious work of Bakunin in the revolutionary movement of the century. The pamphlets published by him, in Russian, French, and Italian, however important they may be, and however useful they may have been in spreading the new ideas, are the smallest part of Bakunin’s work.

The present memoir, “God and the State,” is really a fragment of a letter or report. Composed in the same manner as most of Bakunin’s other writings, it has the same literary fault, lack of proportion; moreover it breaks off abruptly: we have searched in vain to discover the end of the manuscript. Bakunin never had the time necessary to finish all the tasks he undertook. One work was not completed when others were already under way. “My life itself is a fragment,” he said to those who criticized his writings. Nevertheless, the readers of “God and the State” certainly will not regret that Bakunin’s memoir, incomplete though it be, has been published. The questions discussed in it are treated decisively and with a singular vigor of logic. Rightly addressing himself only to his honest opponents, Bakunin demonstrates to them the emptiness of their belief in that divine authority on which all temporal authorities are founded; he proves to them the purely human genesis of all governments; finally, without stopping to discuss those bases of the State already condemned by public morality, such as physical superiority, violence, nobility, wealth, he does justice to the theory which would entrust science with the government of societies. Supposing even that it were possible to recognize, amid the conflict of rival ambitions and intrigues, who are the pretenders and who are the real savants, and that a method of election could be found which would not fail to lodge the power in the hands of those whose knowledge is authentic, what guarantee could they offer us of the wisdom and honesty of their government? On the contrary, can we not foresee in these new masters the same follies and the same crimes found in those of former days and of the present time? In the first place, science is not: it is becoming. The learned man of to-day is but the know-nothing of tomorrow. Let him once imagine that he has reached the end, and for that very reason he sinks beneath even the babe just born. But, could he recognize truth in its essence, he can only corrupt himself by privilege and corrupt others by power. To establish his government, he must try, like all chiefs of State, to arrest the life of the masses moving below him, keep them in ignorance in order to preserve quiet, and gradually debase them that he may rule them from a loftier throne.

For the rest, since the doctrinaires made their appearance, the true or pretended “genius” has been trying his hand at wielding the scepter of the world, and we know what it has cost us. We have seen them at work, all these savants: the more hardened the more they have studied; the narrower in their views the more time they have spent in examining some isolated fact in all its aspects; without any experience of life, because they have long known no other horizon than the walls of their cheese; childish in their passions and vanities, because they have been unable to participate in serious struggles and have never learned the true proportion of things. Have we not recently witnessed the foundation of a white school of “thinkers” — wretched courtiers, too, and people of unclean lives — who have constructed a whole cosmogony for their sole use? According to them, worlds have been created, societies have developed, revolutions have overturned nations, empires have gone down in blood, poverty, disease, and death have been the queens of humanity, only to raise up an élite of academicians, the full-blown flower, of which all other men are but the manure. That these editors of the Temps and the Debats may have leisure to “think,” nations live and die in ignorance; all other human beings are destined for death in order that these gentlemen may become immortal!

But we may reassure ourselves: all these academicians will not have the audacity of Alexander in cutting with his sword the Gordian knot; they will not lift the blade of Charlemagne. Government by science is becoming as impossible as that of divine right, wealth, or brute force. All powers are henceforth to be submitted to pitiless criticism. Men in whom the sentiment of equality is born suffer themselves no longer to be governed; they learn to govern themselves. In precipitating from the heights of the heavens him from whom all power is reputed to descend, societies unseat also all those who reigned in his name. Such is the revolution now in progress. States are breaking up to give place to a new order, in which, as Bakunin was fond of saying, “human justice will be substituted for divine justice.” If it is allowable to cite any one name from those of the revolutionists who have taken part in this immense work of renovation, there is not one that may be singled out with more justice than that of Michael Bakunin.

A great thinker or a man of action - how did Bakunin shape anarchism in the 19th century?

A star is born

Tales of Mikhail Bakunin’s legendary thirst for action abound in the annals of anarchist history. He is most often presented as the quintessential man of (direct-) action. A man of such unbridled revolutionary passion that a comrade on the barricades of Paris in 1848 famously said of him: “On the first day of the revolution he is a treasure, on the second he ought to be shot.”1

But the legend of Bakunin is blurred by all sides. The forces of reaction have attempted to downplay his significance through various character assassinations, as well as assaults on his ideas – most often portrayed as Idealistic or Utopian. An enormous amount of damage was done to his reputation by his rivalry with Karl Marx – the rift between the two great intellectuals still being played out in the disputes between Marxists and anarchists today. And even those who eulogise him have sometimes fallen into the trap of seeing him in these binary – and opposing – terms.

The State of the World Atlas