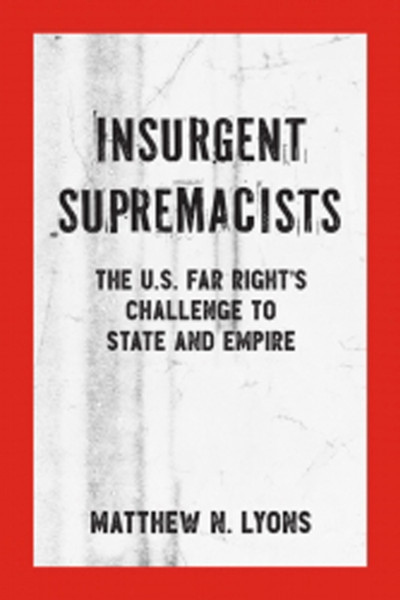 A major study of movements that strive to overthrow the U.S. government, that often claim to be anti-imperialist and sometimes even anti-capitalist yet also consciously promote inequality, hierarchy, and domination, generally along explicitly racist, sexist, and homophobic lines. Revolutionaries of the far right: insurgent supremacists.

In this book, Matthew N. Lyons takes readers on a tour of neo-Nazis and Christian theocrats, by way of the patriot movement, the LaRouchites, and the alt-right. Supplementing this, thematic sections explore specific dimensions of far-right politics, regarding gender, decentralism, and anti-imperialism.

Intervening directly in debates within left and antifascist movements, Lyons examines both the widespread use and abuse of the term fascism, and the relationship between federal security forces and the paramilitary right. His final chapter offers a preliminary analysis of the Trump presidential administration relationship with far-right politics and the organised far right's shifting responses to it.

Both for its analysis and as a guide to our opponents, Insurgent Supremacists promises to be a powerful tool in organising to resist the forces at the cutting edge of reaction today.