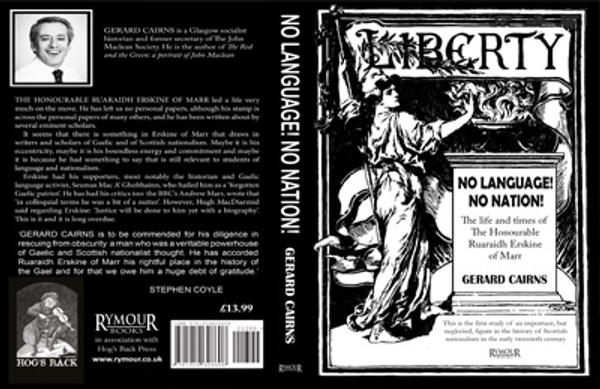 THE HONOURABLE RUARAIDH ERSKINE OF MARR led a life very much on the move. He has left us no personal papers, although his stamp is across the personal papers of many others, and he has been written about by several eminent scholars. It seems that there is something in Erskine of Marr that draws in writers and scholars of Gaelic and of Scottish nationalism. Maybe it is his eccentricity, maybe it is his boundless energy and commitment and maybe it is because he had something to say that is still relevant to students of language and nationalism. Erskine had his supporters, most notably the historian and Gaelic language activist, Seumas Mac A’ Ghobhainn, who hailed him as a ‘forgotten Gaelic patriot’. He has had his critics too: the BBC’s Andrew Marr, wrote that ‘in colloquial terms he was a bit of a nutter’. However, Hugh MacDiarmid said regarding Erskine: ‘Justice will be done to him yet with a biography’. This is it and it is long overdue.

GERARD CAIRNS is a socialist historian from Glasgow and a formder Secretary of The John Maclean Society. He is the author of The Red and the Green: a portrait of John Maclean.