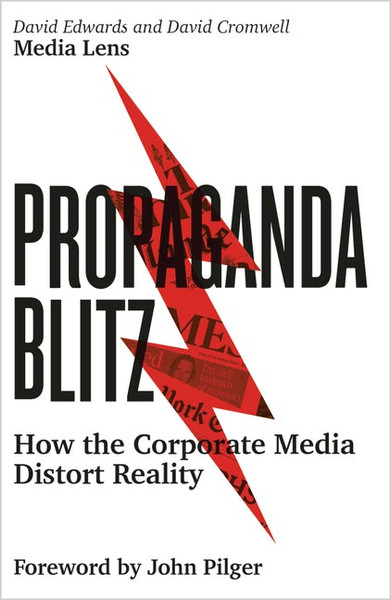 Do you trust the liberal media? While the tabloid and right-wing press - the Sun, The Times, the Mail and the Express - are constantly criticised for dangerous bias, outlets like the BBC and the Guardian are trusted by their readers to report in the interests of the public. However, the reality is that all corporate media is systematically filtered by the powerful interests that own, manage and fund it.

Propaganda Blitz shows that the corporate media does not just 'spin' the news - it fundamentally distorts everything it touches, hiding the real issues from public view, and often completely reversing the truth. This book uncovers a storm of top-down campaigns behind war reporting from Iraq, Syria and Palestine, as well as the destruction of the credibility of figures on the left, including Jeremy Corbyn, Russell Brand and Hugo Chavez.

Exposing propagandists at the top levels of the BBC, as well as their reporting on the Scottish independence referendum, the dismantling of the NHS and looming climate chaos, Propaganda Blitz explains the real meaning of 'objective' journalism, exposes the fake news about 'fake news' and outlines a model for anti-business media activism.

Preface: The Devil's Greatest Trick
1. Anatomy of a Propaganda Blitz
2. Destroying Corbyn
3. Smearing Assange, Brand and Chavez
4. Israel and Palestine: 'We Wait in Fear for the Phone Call from the Israelis'
5. Libya: 'It is All About Oil'
6. Syria: Instant Certainty Promoting War
7. Yemen: Feeding the Famine
8. The BBC as a Propaganda Machine
9. Dismantling the National Health Service
10. Scottish Independence: An 'Amazing Litany' of Bias
11. Climate Chaos: An Inconvenient Emergency
12. 'Fake News', Objective Journalism and the No-Business Model

How To Be an Antiracist