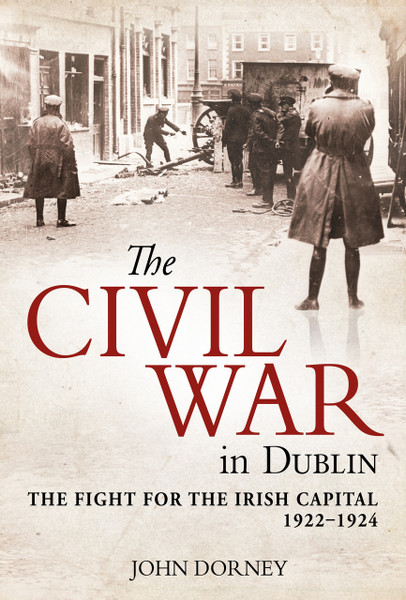 The start of the Irish Civil War was signalled by the artillery bombardment of the Four Courts in Dublin on 28 June 1922. A week later, the Four Courts was gutted and O’Connell Street a smouldering ruin, but the anti-Treaty IRA was driven from the city. Most accounts of the fighting in Dublin end there.

The Civil War in Dublin reveals the complete, shocking story of Ireland’s capital during the ten-month guerrilla war that followed – a ruthless and bitter cycle of execution, outrage and revenge. The strategy of the anti-Treaty forces, often ignored or dismissed in previous histories, is brought to the fore.

Dorney’s exacting research provides total insight into how the city of Dublin operated under conditions of disorder and bloodshed: how civilians and guerrilla fighters controlled the streets, the patterns of IRA violence and National Army counter-insurgency alternated, and – for the first time – how the pro-Treaty ‘Murder Gang’ emerged from Michael Collins’ IRA Intelligence Department, ‘the Squad’, with devastating effect.

The Civil War in Dublin brings the chaos of these years to life through meticulous detail, revealing unsettling truths about the extreme actions taken by a burgeoning Irish Free State and its anti-Treaty opponents.

Epilogue
Appendix I: Casualties of the Civil War in Dublin
Appendix II: Glossary of Terms

John Dorney is an independent historian and chief editor of the Irish Story website. He is the author of Peace After the Final Battle: The Story of the Irish Revolution 1912–1924 (2014) and Griffith College Dublin: A History of its Campus (2013).