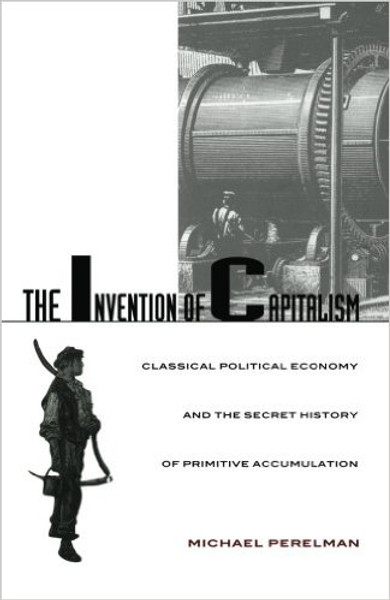 The originators of classical political economy-Adam Smith, David Ricardo, James Steuart, and others-created a discourse that explained the logic, the origin, and, in many respects, the essential rightness of capitalism. But, in the great texts of that discourse, these writers downplayed a crucial requirement for capitalism's creation: For it to succeed, peasants would have to abandon their self-sufficient lifestyle and go to work for wages in a factory. Why would they willingly do this? Clearly, they did not go willingly. As Michael Perelman shows, they were forced into the factories with the active support of the same economists who were making theoretical claims for capitalism as a self-correcting mechanism that thrived without needing government intervention. Directly contradicting the laissez-faire principles they claimed to espouse, these men advocated government policies that deprived the peasantry of the means for self-provision in order to coerce these small farmers into wage labor. To show how Adam Smith and the other classical economists appear to have deliberately obscured the nature of the control of labor and how policies attacking the economic independence of the rural peasantry were essentially conceived to foster primitive accumulation, Perelman examines diaries, letters, and the more practical writings of the classical economists. He argues that these private and practical writings reveal the real intentions and goals of classical political economy-to separate a rural peasantry from their access to land. This rereading of the history of classical political economy sheds important light on the rise of capitalism to its present state of world dominance. Historians of political economy and Marxist thought will find that this book broadens their understanding of how capitalism took hold in the industrial age.

Making A Killing : The Political Economy of Animal Rights

The 1% and the Rest of Us : A Political Economy of Dominant Ownership

Grundrisse : Foundations of the Critique of Political Economy