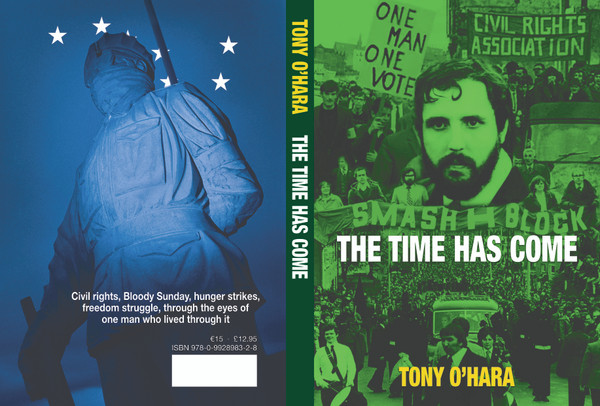 The Time Has Come is the memoirs of Tony O'Hara, INLA Volunteer, Blanketman and OC of INLA prisoners within the H-Blocks at the commencement of the 1981 Hunger Strike. I was to be on protests for four years and four months, until I was released having served my sentence. I was on the blanket and on the No-Wash protest (which began in September 1978) until it ended when the first hunger strike started in the autumn of 1980. We ended it to ensure a hygienic environment so the hunger strikers could stay on the wing for as long as possible or until they were almost at death’s door. I was 22-years-old when No-Wash protest started, but I had already been inside since I was 20.

His brother, INLA Volunteer, Patsy O'Hara was one of three INLA Volunteers who died whilst on Hunger Strike, along with the seven Volunteers from the PIRA. Patsy survived 61 days on hunger strike from 21 March 1981 to until 21st May 1981 when he died.

"When Patsy went on hunger strike, I stood down as OC of the INLA because I thought to myself, “I’ll be the weakest link, if my brother starts dying or falls into a coma.” If that happened, the pressure would have been put on me to come to an agreement with the Brits; so, I was thinking, “For the sake of the hunger strikers, we cannot allow any weakness.”

I didn’t know how I would feel if my brother were dying, but no part of me wanted to tell my brother Patsy to come off the hunger strike as I was 100 percent behind him at the time, and those who were against it, would have been pushing all these demands at me. We still wanted all six demands, so Rab Collins from Belfast replaced me as OC of the INLA."

"If it had been a few years earlier, I would have been the one on hunger strike and not Patsy. I was not permitted to go on the hunger strike because Patsy and the other volunteers were saying, “No you’ve only got five more months to serve, and you’ll be out of here.”

This is Tony's story and memories never before published.

The Ragged Trousered Philanthropists with a foreword by Tony Benn