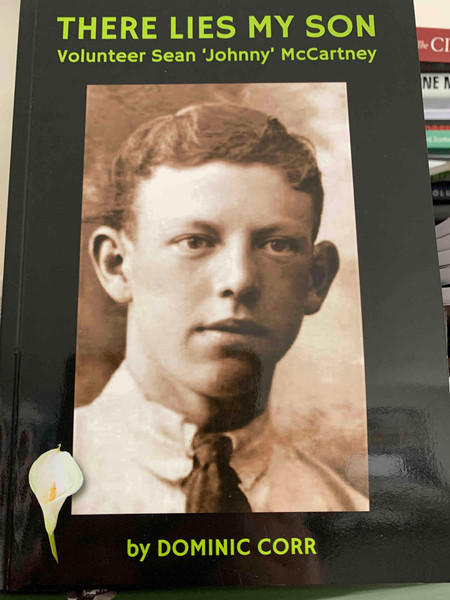 There Lies My Son: Volunteer Sean 'Johnny' McCartney is about my maternal and paternal family history from 1920-1969. Including the death of a family member, IRA Volunteer Sean McCartney, my mother's cousin, who was killed in action during a gun battle on the Croghan Mountain on the Lappanbane stretch of the Lappanduff Mountains in Co Cavan.

He was part of a Belfast-based 3rd Northern Division/3rd Co Cavan Brigade, Oglaigh na hEireann Flying Column ambushed by a mixed Crown force deployment of British Army, RIC and Black and Tans on Sunday 8th May 1921.

It also gives a detailed history of British state/Unionist violence , Sean's family, my own immediate family and my extended maternal and paternal families had endured, particularly my grandmother Mary Ellen McDonnell, who had borne the brunt of being burnt out of family homes in Norfolk Street in four different Unionist pogroms in 1920, 1921, 1935 and 1969.

And it's the story of my grandfather John Corr's trial for murder when he was charged and imprisoned in 1920 on a double murder charge and subsequently faced trial and was found not guilty in 1921, and the imprisonment of his two sons - my father and uncle, as Irish Republican prisoners in the 1930's and 1940s.Corr

I hope you will enjoy the read. This book is an unfunded community venture and no profit is made as all money goes towards printing and distribution costs.