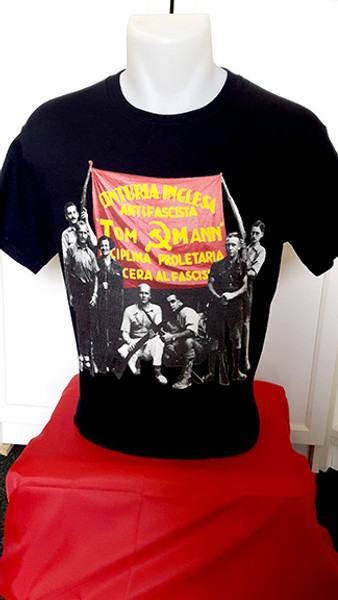 From the IBMT site they have this image and information regarding the picture from left to right: Sid Avner, Nat Cohen (the leader of the group), Ramona (who later married Cohen), Tom Wintringham (kneeling at the front in white), Georio Tioli (an Italian), Jack Barry (the Australian 'Blue') and David Marshall

Other volunteers from Britain had volunteered to become involved almost immediately following the military rising, such as Nat Cohen and Sam Masters, two clothing workers from London on a cycling holiday in Spain. With three other British volunteers, Richard Kisch, Tony Willis and Paul Boyle, they participated in an abortive raid on Mallorca, in which Kisch was badly injured. On their return to Barcelona, the group became the Tom Mann Centuria, under the command of Nat Cohen.

In Barcelona the Centuria was joined by David Marshall, a Middlesbrough clerk and by the London sculptor Keith Scott Watson, who soon left the Centuria to work as a journalist with the Daily Express. Other members included Tom Wintringham, one of the founding editors of The Left Review (and later a commander of the British Battalion), Esmond Romilly, a nephew of Winston Churchill, and Phil Gillan, a lorry driver from Glasgow.

However, by the end of October 1936, after a period of six or seven weeks in which the Centuria took part in no fighting, the volunteers were becoming bored and desperate to get involved. Thus they welcomed the decision to group foreign volunteers together, which led to their transfer to the town of Albacete, chosen as the base of the International Brigades, and their official attachment to the mainly German Thaelmann Battalion.

Antifascista from Past to Present T-shirt

Long Live The Heroes of The International Brigades t-shirt