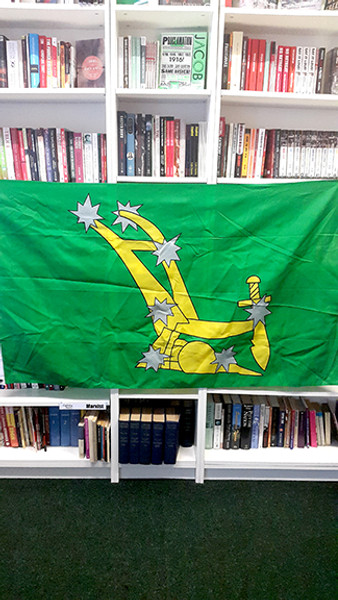 We have a reproduction of the original Starry Plough flag of the Irish Citizen Army size 3 feet x 5 feet.

The Starry Plough was first exhibited publicly on April 5th, 1914 at an Irish Citizen Army meeting. Early in that month the Irish Worker reported on this demonstration and noted that "a large number of the Citizen Army were in attendance, headed by a standard-bearer carrying a beautiful new poplin flag, displaying the design of the Starry Plough, the work of Mr. Megahy." The flag, which was much admired at the time, became the official emblem of the I.C.A. and a source of pride for its volunteers. It's originality helped give the Citizen Army something of an identity all its own. Sean O'Casey, in 'The Story of the Irish Citizen Army' (1919), wrote: "The banner, the idea of which was given by a sympathiser, and executed by Mr. McGahey (Megahy) was generally admired, and its symbolic design of the Plough and Stars was indeed strikingly original. The tallest man in the army was selected as banner-bearer, and he was always proud of his work..."