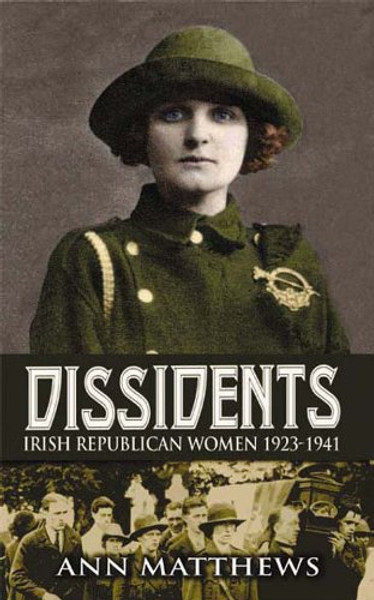 Follow up to Renegades. During the War of Independence around 10,000 Irish women were actively involved in the fight for Irish freedom. So why, with the outbreak of Civil War and in the years following this conflict, did the role of women in Irish politics steadily decline until by the early 1940s only a handful of women were involved?

Dissidents explores the reasons for this decline. From the divisions caused by the signing of the Anglo-Irish Treaty, which led to a fatal splintering of the women's Republican organisation Cumann na mBan, through the effects of internment during the Civil War on female prisoners and the relegation of the majority of women in Irish politics to the margins, Ann Matthews reveals the story of Republican women in the years following Irish independence. She also asks whether they were responsible for their own demise in the political arena, leaving future generations of Irish women without a foundation on which to build.

Extract: Introduction: Dissidents explores how, twenty years after the War of Independence in Ireland, more than 10,000 women who had been active during that conflict has completely disappeared from the political landscape. In particular, Cumann na mBan was an active and visible part of the struggle for independence, playing a major role in communications and the transport of arms. Moreover, figures such as Jennie Wyse-Power and Hanna Sheehy Skeffington were actively involved in Sinn Féin, the main republican party. Yet by the early 1940s women had all but disappeared from the Irish political process. The first steps towards the disintegration of female participation in the political process began during the debates on the Anglo-Irish Treaty in Dáil Éireann. With the defeat of the anti-Treaty side in the Dáil, the women involved in Sinn Féin and Cumann na mBan divided into three sections: pro-Treaty, anti-Treaty and neutral, with the neutrals comprising the majority. Cumann na mBan re-formed as an anti-Treaty organisation and changed its constitution. By May 1922 it had 133 branches- a significant drop from the 838 recorded in July 1921.

In January 1922 Séan T. OKelly founded the Cumann na Poblachta political party, the purpose of which was to oppose the Irish Free State. By July the Irish Republican Army (IRA), with Cumann na mBan, has instigated physical oppostion to the Irish Free State, with Cumann na Poblachta representing the political section of a new Republcan triad whose remit was to oppose by arms the democractically elected Irish Free State government. This triad positioned Éamon de Valera as its figurehead and its opposition culminated in a civil war, which began in July 1922, lasted for nine months and was essentially a period of ferocious bloodletting.

The Irish Free State goverment reacted by introducing internment and by the end of the war there were more than 12,000 men and several hundred women in the internment camps. Dissidents explores the prison experiences of the 645 women held as political prisoners in Kilmainham and Mountjoy Prisons and in the Morth Dublin Union (NDU) camp. Some of these were held for just a few days, but around 300 were held for periods ranging from a few weeks to several months, while some served almost a year and Eithne Coyle and Sighle Humphreys both served for over a year. In each of the prisons the women organised a prisoners council. whose leader dealt with the relevant prison governor on their behalf. However the most fractious relationships in the prison were between the women themselves, as they were not a homogenous group- they came from the upper, middle, working and rural peasant classes. When the middle-class and upper-class women assumed leadership among the prisoners it caused resentment within the ranks of the other two groups. One of the most common forms of protest used by the female political prisoners was the hunger strike and they resorted to this for all kinds of reasons. There were twenty-four hunger strikes in the three prisons during the period from November 1922 to November 1923, in which 219 took part. But internal dissention within their own ranks was problematic, especailly in relation to hunger strikes, as the majority did not agree with this form of protest and some women recorded cases of bullying on the issue [...] By early 1924 Cumann na mBan has a severely reduced membership and was consumed by efforts to save an organisation in serious decline. It did not have a history of developing any long-term strategy and was a reactive organisation, always trying to keep up with the decision-making centre of Republican politics.

The divide between women who were involved in politics and those in Cumann na mBan became more acute after the Civil War. Because of the role Cumann na mBan played militarily, the organisation had no political outlet and its existence was interwoven completely with the IRA. [...] By 1937, when Éamonn de Valera brought the new Irish Constitution before the electorate, the collective female voice that had been so powerful in in 1920-21 had vanished. There were objections from some indiviudal women and societies, but without a united lobby or a tangible female leadership representing all Irish women, it was ineffective. Republican women, through their constant bickering over a period of twenty years, were responsible for their own demise in the political arena.