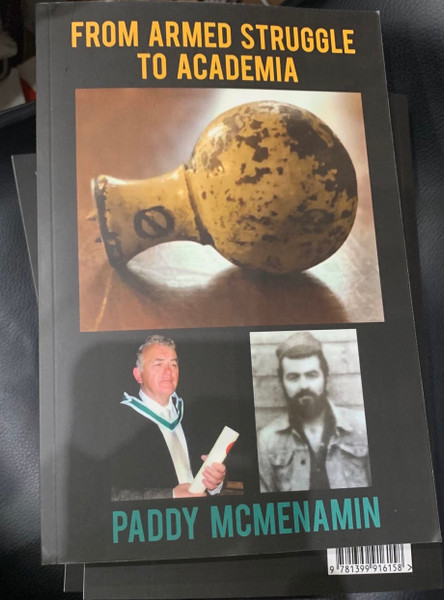 August 1969 the age old conflict in Ireland erupted once again, Paddy McMemnamin was 15 as he manned the barricades in Belfast after a sectarian anti Irish pogrom by loyalists, the RUC and the B Specials. Three months later in November 1969 he was amidst a 75,000 passionate crowd at Paradise as Celtic defeated the Eusebio inspired Benfica in the European Cup, two events which have shaped his life in the past 50 years.

In April 1970 he was among the 136,500 at Hampden as Celtic defeated ‘Super Leeds’ to reach a second European final, in Belfast he was among thousands of rioters as they fought the British Army in Turf Lodge, Ballymurphy and during the Falls Curfew.

He would make one further visit to Glasgow for the Scottish Cup final of 1971 as Harry Hood and Lou Macari put the tax dodgers to the sword in front of a crowd of 120,000. It would be his last visit to Glasgow for a decade and more as ‘Armed Struggle’ took over and the innocence of youth was gone.

On New Year’s Eve 1971 he was interned on the Prison Ship Maidstone in Belfast Lough after days of interrogation in the notorious Palace Barracks  Hollywood, home of the Paras. After his release when Stormont collapsed Belfast was a virtual war zone with continuous battles between nationalists and the Army on the streets and the IRA pursuing the armed struggle with vigour.

In 1972 he found himself back in the infamous prison camp Long Kesh for the next 6 years. It was within the confines of Long Kesh that he gained his real education in life, that is amid riots, hunger strikes, escapes and one night in 1974 burning the camp to the ground and a battle with British soldiers lasting many hours when they dropped illegal CR gas from low flying helicopters.

In tandem with education in the Cages he also kept tabs on events in Glasgow as two more European semi finals were lost as Dixie Deans sent the penalty over the roof of the Celtic End and Atletico kicked us off the pitch but 9-in-a-row was achieved for the first time.

For Celtic as in the Cages and on the streets the mid 1970’s was a time of pathos and panache, suffering and stoicism, the Ibrox Disaster and Johnny Doyle, Bloody Sunday and Bloody Friday, our innocent youth morphed into adulthood and the reality of life, Hunger Strikes, Miners Strikes, Malvinas, and the death of friends, Micky, Norman and Kevin, shot dead by so called republicans, loyalists and the British Army respectively, school friends who never lived to see the peace.

Fast forward to the 1990’s and a new life in Donegal led to the red eye coach and ferry trips to Paradise during the barren decade when tax dodging equated to ill won titles, bar one amazing day in 1998 when Harold Brattbakk bent a ball and the Garngard was a green heaven as we celebrated like it was 1967!

For most of 20 years then the East End became a fortress of noise and passion as the cream of Europe succumbed to a pulsating Paradise.

As well as following Celtic in Scotland and on many a European adventure, he took up where he left his education within Long Kesh and after 20 years in a German Car factory he returned to University at NUI Galway at 50 for the same length of time he was domiciled in the Cages and after a BA, PGDE and MA in History and English he graduated as a Secondary school Teacher, how life can work in mysterious cycles.

Over the last two years of COVID, Lockdown, Masks, Pandemic and death, Paddy put pen to paper when his golf career was put on hold and encouraged by his partner Mary, ‘wrote the book’! It’s a story of life, from the carnage and killing of the 1970’s on the conflict streets of Belfast to walking the hallowed halls of academia and reaching for a dream.

He lost many, many friends during the conflict and spent many years in the Cages of Long Kesh with many more, they were difficult times which hopefully are over forever. Paddy now is a ‘Teacherman’, a Writer, a weekly columnist with the Tirconaill Tribune in Donegal and regular contributor to More Than 90 Minutes. Celtic Fanzine.