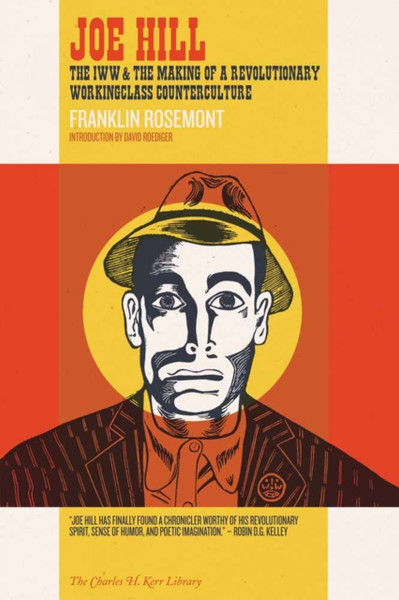 A monumental work, expansive in scope, covering the life, times, and culture of that most famous of the Wobblies—songwriter, poet, hobo, thinker, humorist, martyr—Joe Hill. It is a journey into the Wobbly culture that made Hill and the capitalist culture that killed him. Many aspects of the life and lore of Joe Hill receive their first and only discussion in IWW historian Franklin Rosemont’s opus.

In great detail, the issues that Joe Hill raised and grappled with in his life: capitalism, white supremacy, gender, religion, wilderness, law, prison, and industrial unionism are shown in both the context of Hill’s life and for their enduring relevance in the century since his death.

Collected too is Joe Hill’s art, plus scores of other images featuring Hill-inspired art by IWW illustrators from Ralph Chaplin to Carlos Cortez, as well as contributions from many other labor artists.

As Rosemont suggests in this remarkable book, Joe Hill never really died. He lives in the minds of young (and old) rebels as long as his songs are sung, his ideas are circulated, and his political descendants keep fighting for a better day.

“Rosemont’s treatment of Joe Hill is passionate, polemical, and downright entertaining. What he gives us is an extended and detailed argument for considering both Hill and the IWW for their contributions toward creating an autonomous and uncompromising alternative culture.”
—Gordon Simmons, Labor Studies Journal

“Rosemont seems to have hunted down every available detail of Hill’s short life and abiding legend.”
—Los Angeles Times

“It has been a long time since so much new material on Joe Hill and the Wobblies has been collected in one volume. All students of the IWW, labor cartoons and songs, radical humor, and the history of blue-collar countercultures in the U.S. will find this book indispensable.”
—Salvatore Salerno, editor of The Big Red Songbook

Franklin Rosemont was born in Chicago in 1943. His father, Henry, was a labor activist, and his mother, Sally, a jazz musician. He edited and wrote an introduction for What Is Surrealism? Selected Writings by André Breton, and edited Rebel Worker, Arsenal/Surrealist Subversion, The Rise and Fall of the Dill Pickle, and Juice Is Stranger than Friction: Selected Writings of T-Bone Slim. With Penelope Rosemont and Paul Garon he edited The Forecast Is Hot! His work was deeply concerned with both the history of surrealism (writing a foreword for Max Ernst and Alchemy: A Magician in Search of Myth) and of the radical labor movement in America. For several decades he and Penelope Rosemont combined such interests helming the venerable radical publishing house the Charles H. Kerr Co. He died in 2009 in Chicago.

David Roediger is Kendrick Babcock Chair of History at the University of Illinois. Among his books are Our Own Time: A History of American Labor and the Working Day (with Philip S. Foner), How Race Survived U.S. History: From Settlement and Slavery to the Obama Phenomenon, and The Wages of Whiteness: Race and the Making of the American Working Class. He is the editor of Fellow Worker: The Life of Fred Thompson, The North and Slavery, and Black on White: Black Writers on What It Means to Be White as well as a new edition of Covington Hall’s Labor Struggles in the Deep South. His articles have appeared in New Left Review, Against the Current, Radical History Review, History Workshop Journal, and The Progressive.