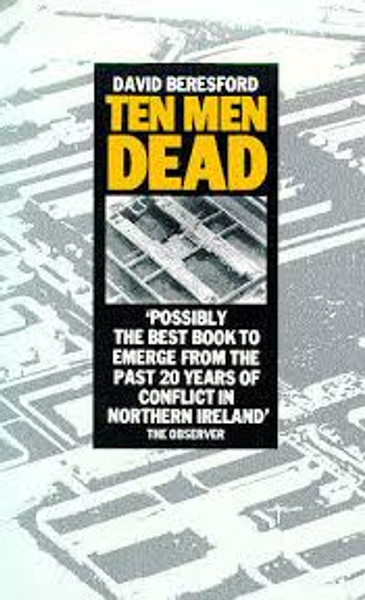 "An excellent history of the 1981 hunger strike in Ireland that details the broad cast of characters with insight and care". -- from the New York Times Book Review's "best Books of 1989"In 1981 ten men starved themselves to death inside the walls of Long Kesh prison in Belfast. While a stunned world watched and distraught family members kept bedside vigils, one "soldier" after another slowly went to his death in an attempt to make Margaret Thatcher's government recognize them as political prisoners rather than common criminals.Drawing extensively on secret IRA documents and letters from the prisoners smuggled out at the time, Ten Men Dead tells the gripping story of these strikers and their devotion to the cause. An intensely human story, Ten Men Dead offers a searing portrait of strife-torn Ireland, the IRA, and the passions -- on both sides -- that Republicanism arouses."Beresford puts in human terms the conduct of an often frightful and inhumane struggle. He makes the incomprehensible comprehensible". -- Commonweal

THE INSIDE STORY OF THE 1981 IRISH HUNGER STRIKE, BASED ON THE MOST EXTRAORDINARY CORRESPONDENCE IN PENAL HISTORY

"A fascinating and frightening account, not only of the strike but of the whole Republican ethos, which comes nearer than any previous study to explaining why we are still where we are 18 – or is it 800 – years on."
BELFAST TELEGRAPH

"Remarkable… Besides providing a blow-by-blow account of the vicious confrontation between the British government and the IRA, Beresford takes us behind the scenes in a way which has never been done before."
IRISH PRESS

"Extraordinary revelations from both sides"
TIME OUT

"The definitive account of that climactic episode… has unusual power and immediacy."
SUNDAY PRESS

Shocking and moving at once – an electrifying story… If it were a novel, it would have a caption on the back telling the reader: 'You will not be able to put it down'"
FORTNIGHT

"It is one of the very few books that will be read when the present phase of Irish history is over."
MARY HOLLAND, 'Observer'