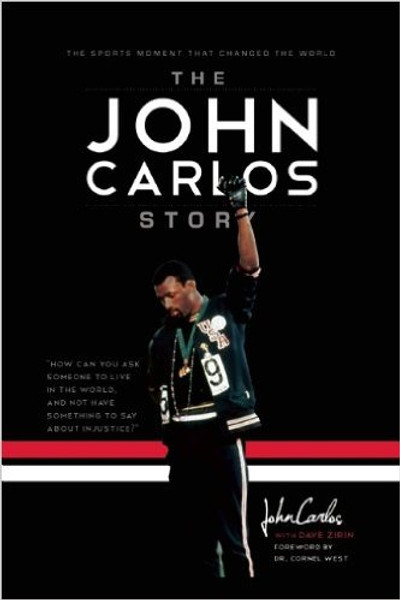 Seen around the world, John Carlos and Tommie Smith’s Black Power salute on the 1968 Olympic podium sparked controversy and career fallout. Yet their show of defiance remains one of the most iconic images of Olympic history and the Black Power movement. Here is the remarkable story of one of the men behind the salute, lifelong activist, John Carlos.

DR. JOHN CARLOS is an African American former track and field athlete and professional football player, and a founding member of the Olympic Project for Human Rights. He won the bronze-medal in the 200 meters race at the 1968 Summer Olympics, where his Black Power salute on the podium with Tommie Smith caused much political controversy. He went on to equal the world record in the 100 yard dash and beat the 200 meters world record. After his track career, he enjoyed brief stints in the National Football League and Canadian Football League but retired due to injury. He became involved with the United States Olympic Committee and helped to organize the 1984 Summer Olympics. He later became a track coach at a high school in Palm Springs, where he now resides. He was inducted into the USA Track & Field Hall of Fame in 2003.

Dave Zirin is the sports editor for the Nation and the author of Game Over: How Politics Has Turned the Sports World Upside Down. Named one of UTNE Reader’s “Fifty Visionaries Who Are Changing Our World,” Zirin is a frequent guest on MSNBC, ESPN, and Democracy Now! He hosts WPFW's The Collision with Etan Thomas and has been called "the best sportswriter in the United States," by Robert Lipsyte.

One of America's most provocative public intellectuals, Dr. Cornel West has been a champion for racial justice since childhood. His writing, speaking, and teaching weave together the traditions of the black Baptist Church, progressive politics, and jazz. The New York Times has praised his "ferocious moral vision." His many books include Race Matters, Democracy Matters, and his new autobiography, Brother West: Living and Loving Out Loud.

"John Carlos is an American hero. And finally he has written a memoir to tell us his story—and a powerful story it is. I couldn't put this book down."
—Michael Moore

"Biblically, athletes with superior attributes were seen as gifts from God. Whether it was Samson staring down the Philistines or David slaying Goliath, they and latter-day heroes such as Joe Louis, Jackie Robinson and Muhammad Ali, selflessly used their gifts and magnificently magnified platforms to transform society. It is in that tradition that John Carlos, and his teammate Tommie Smith, raised their fists in solidarity with the American civil rights struggle, as well as the struggles of those who exist on the downside of advantage. It was a statement for the ages. This act of righteous defiance lifted us all to a new level of dignity and shared responsibility to improve the conditions of the poor the world over...But the price of heroism is high. John Carlos paid and this is his story."
—Rev. Jesse L. Jackson, Sr.

"The John Carlos story is the remarkable chronicle of an epic life sketched against the defining crisis of race in America. Carlos' athletic genius on the field is matched by his heroic will to overcome trials and tribulations in his personal life, and to find resurrection in his professional life. This is an inspiring and eloquent story about a great American whose commitment to truth, justice and democracy were tested and found true."
—Michael Eric Dyson

"John Carlos' life story is an insightful and gripping look at the times he lived and the Olympics he helped make so memorable. He shows us that the one day that made him famous was only the most outward and visible sign of a touching and thoughtful life."
—Frank Deford

"The John Carlos Story is a blow by blow detail of triumph vs tragedy from the jump. Again Dave Zirin uncovers, and yet illuminates the mere footnotes of this sports history hero with his impeccable balance of truth. This story drills a hole into the myth of black athlete success and worship."
—Chuck D, Public Enemy

"In this breathlessly readable tale, John Carlos finally steps out of that iconic photograph to become the vibrant, fascinating hero we never really knew."
—Robert Lipsyte, author of An Accidental Sportswriter, a memoir

"John Carlos's story of bravery and sacrifice will warm your heart. But beyond his individual heroism, it speaks to the power of athletes who bodaciously refuse to just "shut up and play." Carlos and Zirin capture the way that through sports, the actions of a few athletes resonate across the globe."
—William Hunter, Executive Director, National Basketball Players Association

"An intelligent and insightful look into the journey of one of our most underrated heroes. Mr. Carlos' passion for justice and fairness has changed our world. You can feel his passion (and his anger) in every word."
—Jemele Hill, ESPN columnist and television analyst

"John Carlos tells a compelling story of courage and the consequences of action. He, Tommie Smith and many other Black athletes took a stand against racial injustice in the U.S. and racial injustice in sports. They were ridiculed by many mainstream commentators at the time, but their actions helped to transform both the sports world and this country. This book was by and about someone who has been and remains one of my heroes."
—Bill Fletcher, Jr., editorial board member, BlackCommentator.com

"History tells us iconic moments in sport are always enveloped in personal stories of sacrifice, courage, and angst. The lasting images that we see occur in a flash contain enriching back stories that are typically even more significant and tragic than the moment itself. John Carlos and Dave Zirin have combined to tell such a story. The moment that two men stood on the world platform to take a stand after they had become the best in the world is rich, complicated but most importantly as relevant today as it was in Mexico City. Dave brings a beautiful and passionate voice of truth to his listeners and achieves the same in this book about a man who became a legend. I am proud to call him my friend."
—DeMaurice Smith, Director NFL Players Assiciation