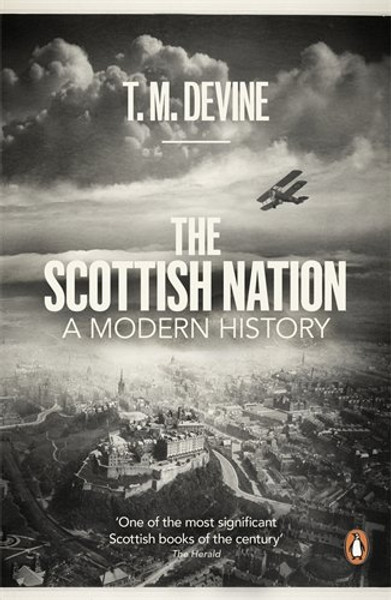 Part of a trilogy on Scottish history, T.M. Devine's The Scottish Nation: A Modern Historytraces the epic story of a nation from the Union with England to today's debates on the possibilities of Scottish independence.

Drawing on extensive research and exploring everything from the high politics of the devolved parliament to the everyday effects of huge and growing levels of social inequality, this bestselling history places Scotland firmly within an international context and provides a key focus for the ongoing debate regarding Scotland's future.

Ranging from high politics to everyday life, The Scottish Nation is the most read modern history of Scotland at home and abroad: vital to understanding an ancient nation at a crucial time.

'Outstanding ... if you are after answers to the big questions of Scottish history, Devine is your man'
Niall Ferguson

'Magnificent ... a high achievement, a history of modern Scotland which, rarely for the subject, endows with sweep and power the changes that have created the country we live in'
Michael Fry, The Herald

'The work of a compendious historical mind ... the first history of Scotland which both a nationalist and a unionist Scot can keep on their shelves with pride, and that is a large achievement in itself'
John Lloyd, Financial Times

'A fiercely intelligent account of Scotland ... Devine is the country's most prominent historian, and from the evidence of this book, rightly so'
Rosemary Goring, Scotland on Sunday

T.M. Devine, OBE is University Research Professor and Director of the Research Institute of Irish and Scottish Studies at the University of Aberdeen. His other books include The Scottish Nation and To the Ends of the Earth.