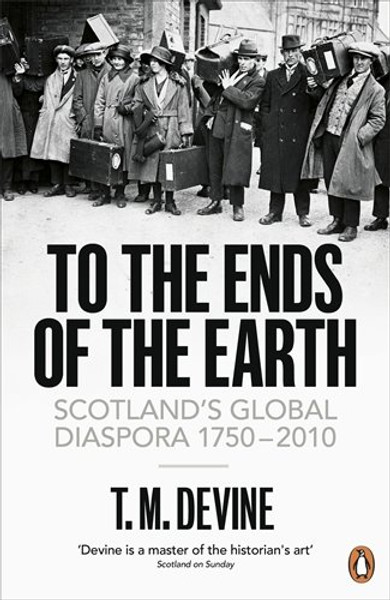 Part of his trilogy on Scottish history, T. M. Devine's To the Ends of the Earth is a compelling account of the Scots as a 'global people', charting their forgotten role in the building of the modern world.

The Scots are one of the world's greatest nations of emigrants. For centuries, untold numbers of men, women and children sought their fortunes in every part of the globe, from the British Empire to the United States, in cities and on prairie farms, as traders, bankers, missionaries, soldiers, politicians and engineers.

With To the Ends of the Earth T.M. Devine - acclaimed author of The Scottish Nation and Scotland's Empire - puts this extraordinary epic centre stage in Scottish history, cutting through myth and sentiment surrounding stories such as the Highland Clearances and the Enlightenment to show the true impact of Scottish emigration on the world, and on the nation it left behind.

'Devine's final book in a remarkable trilogy ... fascinating and far-reaching ... His conclusions are ... thoughtful and incisive'
Scottish Field

'[This] rigorous and unsentimental history of Scotland's global diaspora ... explodes myths and foregrounds the prosaic realities of emigration ... it has the fascinating charm of a detective story'
Guardian

'Devine has brought a greater understanding to this fascinating subject and offers an intriguing perspective on a key component of our history and national identity'
Alex Salmond, First Minister Of Scotland, Herald

T.M. Devine, OBE is University Research Professor and Director of the Research Institute of Irish and Scottish Studies at the University of Aberdeen. His other books include The Scottish Nation and To the Ends of the Earth.