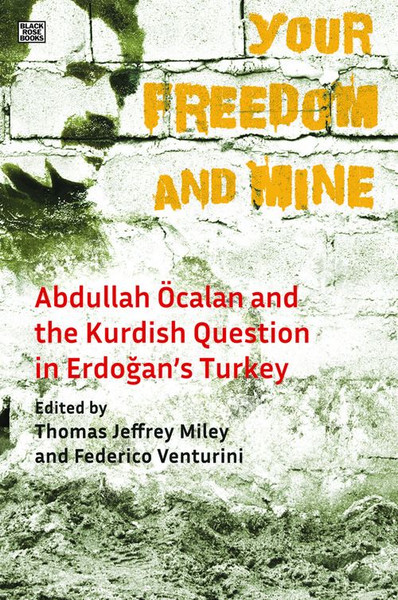 About Your Freedom and Mine

"Only free men can negotiate. Prisoners cannot enter into contracts… I cannot and will not give any undertaking at a time when I and you, the people, are not free. Your freedom and mine cannot be separated."

— From a letter by Nelson Mandela during his imprisonment, 10 February 1985

A revolutionary imprisoned on an island fortress may hold the key to peace in the Middle East. From the confines of his Turkish prison cell, Abdullah Öcalan, the leader of the Kurdish Freedom Movement, has proposed a political solution to the interminable Turkish-Kurdish conflict, leading many to describe him as the 'Kurdish Mandela'. His ideas on direct democracy and women’s liberation have even inspired the Rojava Revolution in northern Syria.

As Syria exploded in civil war and Turkey descended into tyranny, an international peace delegation of European luminaries led by Mandela’s lawyer twice attempted to meet with Öcalan at his prison on İmralı Island. This book is the fruit of these momentous delegations.

Your Freedom and Mine offers crucial insight into the dramatic history, reality, and prospects of the Kurdish Question in Turkey by combining historical survey, human rights reports, interviews, personal accounts, geopolitical analysis, and political philosophy. The volume is the remarkable work of 25 contributors, including politicians, academics, journalists, Iceland's former minister of justice, veteran war correspondent Jonathan Steele, and key leaders inside the movement.

Note from the Publisher, by Dimitrios Roussopoulos

Part One: The Historical Context of the Conflict

Part Six: Democratic Confederalism and the Scramble for the Middle East

Notes on the Contributors

Thomas Jeffrey Miley, Ph.D., is a lecturer of political sociology at the University of Cambridge. He received his PhD. from Yale University (2004) and has lectured at Yale University, Wesleyan University, and Saint Louis University (Madrid). He has been a Garcia-Pelayo Research Fellow at the Center for Political and Constitutional Studies in Madrid (2007-2009). He was a delegate in the EU Turkey Civic Commission (EUTCC) International Imrali Peace Delegations in 2016 and 2017.

Federico Venturini, Ph.D., is an independent activist-researcher with a PhD in geography from the University of Leeds on social ecology and urban social movements in Rio Di Janeiro. Since 2013, he is a member on the advisory board of the Transnational Institute of Social Ecology. He was also a delegate in the EU Turkey Civic Commission (EUTCC) International Imrali Peace Delegations in 2016 and 2017.
2018: 432 pages; 6 x 9