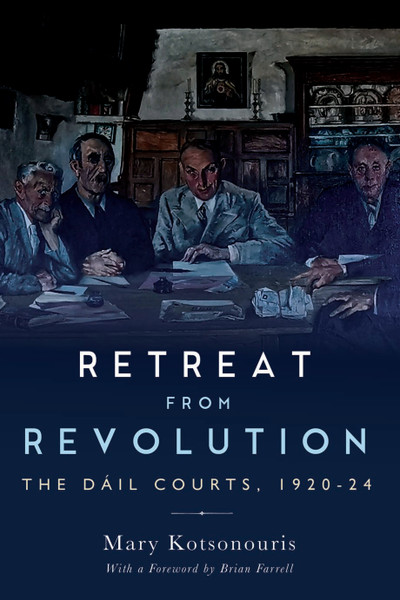 In the spring of 1920, a remarkable phenomenon occurred in Ireland: the people took over the administration of law and order in their own communities and turned their backs on the enforced British judicial system. It became international news. Small tribunals adjudicated in local disputes about land, the local Volunteer companies abducted and punished thieves and petty criminals, directed public order at race meetings and fair days, and in parts of the country burnt down the existing court houses.

Retreat from Revolution is the first in-depth account of the courts system established by a Dáil decree in June 1920. Presided over by locally elected justices and attached to virtually every parish in the country for ready access, these Dáil courts soon displaced the largely abandoned British court system, on which people turned their backs.

This is the true story of the Dáil Courts as told by the people involved – the litigants, the officials and the judges. Mary Kotsonouris vividly portrays the self-confidence of these men and women, their ability to create structure that answered their needs, and their keen appreciation of their place in the emerging democracy.

2. The Legal Regime of the Republic

3. In Dark and Evil Days

4. The Truce: An Honourable Understanding

6. Though the Heavens Fall

About the Author: Mary Kotsonouris was born in Limerick and educated in Roscrea and University College Dublin. She practised as a solicitor in Dublin before serving as a judge of the District Court for nine years. In 1992 she was awarded an M.Litt degree for legal research by Trinity College and she is the author of Talking to Your Solicitor (1992), The Winding-up of the Dáil Courts, 1922–1925 (2004), and ‘Tis All Lies, Your Worship….:Tales from the District Court (2011).